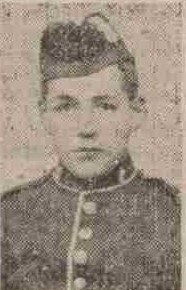 Pte. John Hodge a Dundee member of the 3rd Black Watch, has been killed in the fighting at Ypres.  The sad news was received by his widowed mother, whose sole support he was.  Mrs Hodge, who resides at 17 Brook Street, some time ago received a letter stating that her son had been wounded, but had returned to the fighting line.  When war commenced Hodge was employed as a millworker.  For three years he had put in an annual period of training with the Black Watch.  He was only twenty years of age.

Can you tell us more about John Hodge'? Some additional facts, a small story handed down through the family or perhaps a picture or an heirloom you can share online. Contact our curator...