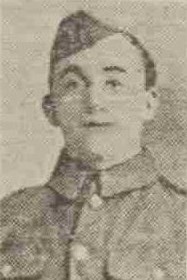 Private James Hogg, 2nd Battalion, Black Watch, who has died of pneumonia in Egypt, went to France in August, 1914, as a reservist.  He endured all the hardships of the gallant little army till he was wounded at the first battle of Ypres in October, 1914.  In March, 1916, he volunteered for service in Mesopotamia, where he fought from the relief of Kut until after the capture of Bagdad, when he was sent to Palestine.  After three years continuous service he was expecting to get back to his home to 28 Raglan Street.  Before enlisting he was employed on the Caledonian Railway as a fireman.  He was 23 years of age, and was well-known in football and swimming circles.

Can you tell us more about James Hogg'? Some additional facts, a small story handed down through the family or perhaps a picture or an heirloom you can share online. Contact our curator...