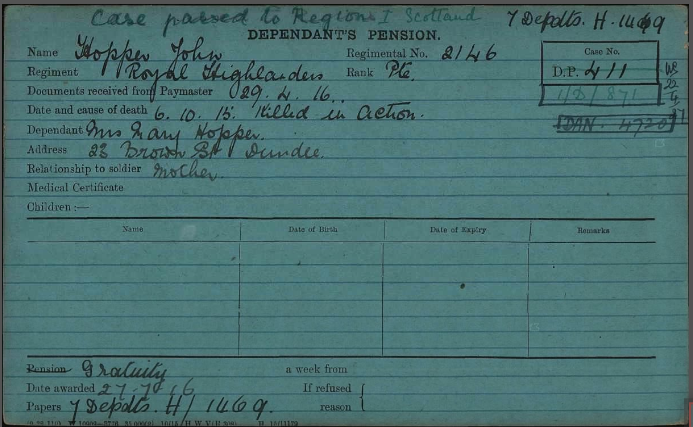 Sad circumstances attend the death of Private John Hopper, 1st Black Watch, a Dundee Soldier.  He was stationed in India with his regiment when war broke out, and from being there he went direct to the fighting zone in France, but was early struck, being wounded at the battle of Mons.  Having recovered, he rejoined his regiment in France, but he was soon again home suffering from frostbitten feet.  When quite fit he returned to France for the second time.

The news of his death was intimated to his sister, who resides at 23 Brown Street, Dundee, by the receipt of a letter from deceased’s officer, who pays him a high tribute.  He states that Private Hopper was hit through the head by a bullet, and continues :–“He met his death like a true Scotsman, dying for his King and country.  He was loved by all who knew him, and especially by the men in his platoon and company.”

Can you tell us more about John Hopper'? Some additional facts, a small story handed down through the family or perhaps a picture or an heirloom you can share online. Contact our curator...