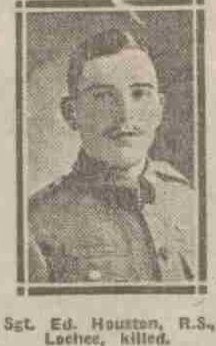 Sergeant Edward Houston, Royal Scots, 63 High Street, Lochee, died.   He will be remembered as having gained the Military Medal for bravery at the battle of Loos.   This is the second of the Houston family to fall in action, an older brother, Lance-Corporal Charles Houston, of the Royal Scots, having been killed on 29th July last.  The eldest son, Sergeant William Houston, is also in the Royal Scots.

Corporal Edward Houston, 2nd Royal Scots, was wounded in July last, and is now acting as instructor at one of our Scottish barracks.  He recently received the Military Medal for “bravery on the field” at the battle of Loos.

Can you tell us more about Edward Small Houston'? Some additional facts, a small story handed down through the family or perhaps a picture or an heirloom you can share online. Contact our curator...