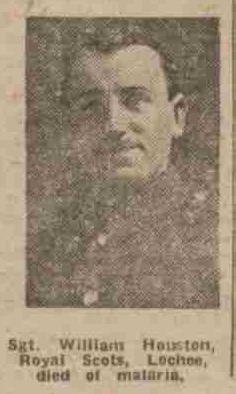 William Houston, 1st Royal Scots, (Salonika Forces), has been nine years in the army and was drafted from India to the front at the outbreak of war.  He was wounded on 31st May 1915, and for a time afterwards acted as instructor to a home unit. Has been about three months in Salonika.

Mr and Mrs John Houston, 63 High Street, Lochee, have received intimation that their eldest son, Sergeant William Houston, Royal Scots, died at Salonika, 4th October, from influenza and malaria fever.  Sergeant Houston, who had been in this regiment for eleven years, was drafted from India when war broke out, and was wounded at the battle of the Marne.  For some time after that he was stationed in this country.  He had been at Salonika for over two years.  This is the third and last member of Mr Houston’s family to give his life for his country.  Sergt. Edward Houston died of wounds on 19th April, 1917, while Lance Corporal Charles also died of wounds on 29th July 1916.

Can you tell us more about William Forrester Houston'? Some additional facts, a small story handed down through the family or perhaps a picture or an heirloom you can share online. Contact our curator...