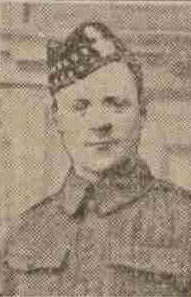 After being six weeks at the front, Pte. Peter Hughes of the Royal Scots Fusiliers, has been reported missing.  Intimation to this effect was received by his mother, who resides at 100 Brook Street, Dundee.  Pte. Hughes who is 28 years of age, was previously employed as a labourer in the sawmill of Bell & Sime, Ltd.  Two brothers are in the fighting line at present—James, belonging to the same regiment, while Charles is in the Scottish Rifles.

Inserted by his sorrowing mother and sisters.

Can you tell us more about Peter Hughes'? Some additional facts, a small story handed down through the family or perhaps a picture or an heirloom you can share online. Contact our curator...