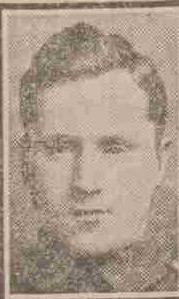 Pte. Jas Hughes, Royal Scots Fusiliers has been killed in action.  His wife, who resides at 8 Pole Street, Dundee, has received official intimation that he fell on 3rd May.  Deceased, who was 22 years of age, enlisted in December, 1915, and had been in the trenches about a year.  Previous to enlistment he was a millworker in Miln Street Mill.

Two brothers of Pte. Hughes are at present at the front, one of them, a lad of 18, being in the K.O.S.B. and the other in the Scottish Rifles, while only last week official intimation was received of the death of another brother, also in the Royal Scots Fusiliers, who was reported missing about ten months ago.

Can you tell us more about James Hughes'? Some additional facts, a small story handed down through the family or perhaps a picture or an heirloom you can share online. Contact our curator...