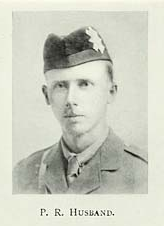 Peter has no known grave but is remembered on the Thiepval Memorial. He arrived in France 5 September 1916 and was killed in action just 3 weeks later. Peter was a former pupil of Dundee High School.

To the already big roll of brilliant young men of Dundee who have laid down their lives for their country falls to be added the name of one who gave up the profession of the ministry and gallantry went forward to the battlefield.  He is Second-Lieutenant Peter Ross Husband, of the Black Watch, younger son of Mr P. F. Husband, solicitor, Dundee.

Official intimation has been received by Mr Husband that his son was killed in action on September 26.

The deceased officer, who was a young man of great promise, was educated at Dundee High School, of which he was a gold medallist, and Edinburgh University, and took his theological course at New College, Edinburgh.  On being licensed for the ministry he held assistantships in Edinburgh and Glasgow, and before enlistment he was serving under the Rev. Dr Simpson, of High U.F. Church, Edinburgh.  He enlisted in the Inns of Court O.T.C., and was afterwards gazetted to the Black Watch.  He had been at the front for only three weeks.

Lieutenant Husband’s elder brother James, who was associated with his father in business, is also an officer in the Black Watch, and was recently wounded.  To the deceased officer’s parents much sympathy will be extended in their bereavement, and former pupils of Dundee High School, who have fragrant memories of his fine personality, will deeply deplore his loss.

Mr P. F. Husband, solicitor, Dundee, has received the following letter referring to the death of his son, Lieutenant Peter Ross Husband, on the battlefield :—

“As a fellow officer of your son, I write a few words to tell you how very, very sorry we all were when he was killed.  I knew him and loved him.  He was a fine, brave, and unselfish gentleman and officer.  When he was killed he was bravely leading an attack (a successful one) on a length of German trench.  I was quite near him when he was killed, and am able to tell you he was killed instantaneously.  He was not in any way disfigured, and just lay very peacefully, with a smile on his face.  Once more let me tell you how sorry I and all the other officers are and how much they all sympathise with you.”

Can you tell us more about Peter Ross Husband'? Some additional facts, a small story handed down through the family or perhaps a picture or an heirloom you can share online. Contact our curator...