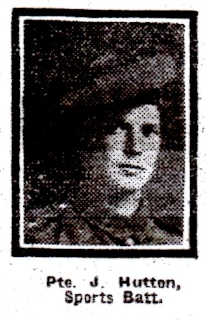 James has no known grave but is remembered on the Menin Gate Memorial. He was the brother of Cpl George M. Hutton, 541, 1/3rd Battalion, Scottish Horse, who is believed to have returned home safely.

IS KILLED IN ACTION AT MESSINES.

Still another Dundee soldier has made the supreme sacrifice.

The relatives of James Gray Hutton, who reside at 304 Perth Road, have received intimation of his death in action on 31st October at Messines, Belgium.

Private Hutton, who was a member of the famous London Scottish, was in his twenty-ninth year.  He was the elder son of the late James Hutton, architect.

Can you tell us more about James Gray Hutton'? Some additional facts, a small story handed down through the family or perhaps a picture or an heirloom you can share online. Contact our curator...