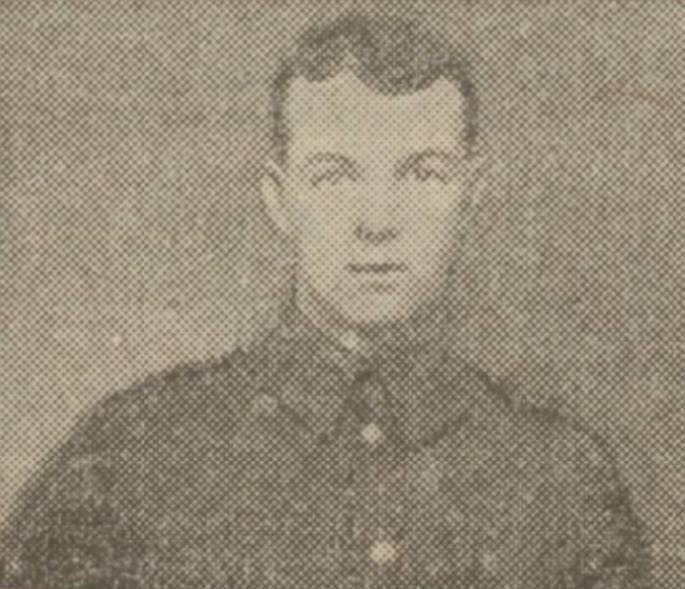 19266 Pte. James Hutton, 2nd Royal Inniskilling Fusiliers, was killed in action on 22 July 1915, aged 33.
James’ mother, Isabella Hutton, 111 Rosebank Street, had six sons serving the colours. James was the second to lose his life.
He was a former regular soldier, and employed as a dyeworker on the outbreak of war. He re-enlisted, joining his old regiment at the front. The following letter from one of his comrades mentions James was one of thirteen men killed by the same shell.
He is buried in Bethune Town Cemetery, Pas de Calais, France.

SHELL KILLS THIRTEEN MEN. Mrs Hutton, 111 Rosebank Street, Dundee, has been hard hit by the war.
Six of Mrs Hutton’s sons had been fighting their country’s battles in France, but, sad to say, two of them have fought their last fight, while other two have been wounded.
The news of the death in action of Lance-Corporal Thos. Hutton, Gordon Highlanders, was received about two months ago, while Private Philip Hutton, 1st Black Watch, and Private David Hutton, 4th Black Watch, have also been reported wounded.
The latest addition to the family’s casualty list is Lance-Corporal James Hutton, of the 2d Inniskilling Fusiliers. His wife, who resides at 12 Johnston’s Lane, Dundee, yesterday received official intimation of his death in action on 22d July. Thirty-three years of age, the lance-corporal had previously served in the regiment for seven years, and on the outbreak of war he re-enlisted. He was formerly employed as a dyeworker in the city.
His chum, Lance-Corporal Albert Brown, in a letter to Mrs Hutton, explained how her husband met his death. The battalion were resting behind the firing line after a spell in the trenches when they were shelled. Lance-Corporal Hutton was having a wash at the time when a shell burst close to him, and he and other twelve men were killed.
The other two brothers in the army are Corporal George Hutton, 4th Black Watch, who came home from France a fortnight ago, and Private William Hutton, who is at present in the field with the 4th Black Watch. The Courier, Thursday, 5 August 1915, 6.

Can you tell us more about James Hutton'? Some additional facts, a small story handed down through the family or perhaps a picture or an heirloom you can share online. Contact our curator...