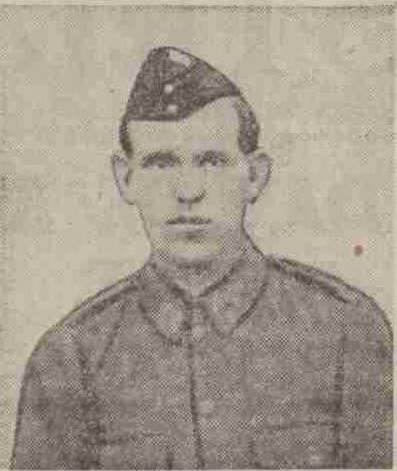 There is no Thomas Hyland 8591, listed on either C.W.G.C. or S.D.G.W. Thomas was initially reported to have been killed in action in 1914, when in fact he was being held as a P.O.W. and is believed to have returned home safely.

CUT IN TWO BY SHRAPNEL SHORTLY AFTER TALKING OF HOME.

The war has struck Mrs Hylands, who resides at 22 Lorne Street, Lochee, a cruel blow.  One of her sons has been killed, another wounded in five places, and a third she has not heard of since the war broke out.

Private Thomas Hylands and Corporal Patrick Hylands, of the 2d Connaught Rangers, fought side by side until separated by a fierce attack by the Germans, and Private Lawrence Hylands, of the Royal Scots Fusiliers, has not sent any word to his mother, who is anxiously awaiting news.

The intimation that one of her sons was killed and the other wounded came to Mrs Hylands in the form of the following telegram from Patrick :___

“Brother Thomas killed.  I am wounded. Don’t worry. From Pat.”

Corporal Hylands, who was attached to the signalling staff of his regiment, lay for some weeks in a French Hospital.

He was for fifty hours in the trenches at the battle of Mons fighting alongside his brother Thomas.  It was in this engagement that he was wounded four times on the left side, but after his wounds had been dressed, he again took part in the battle of Cambrai, in which engagement Thomas was killed.

The circumstances attending his death are pathetic in the extreme.  The two brothers, still fighting side by side, were talking of home and their mother, and Thomas was congratulating Patrick on the fact that his wounds were not very serious when, being hard pressed by the enemy, they were separated.

When the fighting had died down Patrick, along with several members of the Red Cross, began a search for his brother.  He was horrified to find his body cut in two, apparently by a shrapnel shell.

The brave corporal had again to retire from the fighting line three hours later when he was struck on the right leg by a piece of shrapnel.  He was removed to the hospital in St Nazareth, where it was seen that he was also suffering from an attack of pneumonia.

One of the drawbacks during the fighting was the want of tobacco, and Corporal Hylands was very grateful to a comrade for two “fags.”

The 2d Connaught Rangers suffered severe losses.  Out of 1800 the losses were about 700 men and 25 officers.

Thomas, who was 26 years of age, was a Reservist, and served with his regiment in India for eight years, and had been two years home.  He was employed in Dundee as a labourer with the National Telephone Company.  Thomas was unmarried.

Patrick, who is 30 years of age, was nine years with his regiment, and came home three years ago.  He served through the South African War, and came through all his engagements unhurt.  Corporal Hylands was married only a year ago, and has a child.  His wife resides in Dublin Street, Granard, County Longford, where he is at present.  Lawrence Hylands, who was unmarried, has been five years with his regiment. He was 22 years of age.

Officially reported killed in November, 1914, Private Thomas Hyland, Connaught Rangers, has now written from Germany to his mother at Lorne Street, Dundee, saying that he is being interned in Switzerland, and “thanking God to get out of the hands of the Germans after three and a half terrible years of suffering.”  Private Hyland was in the fighting in the first weeks of the war.  A brother thought he saw him killed by shrapnel, and what was thought to be his body was found at Cambria and interred.

Can you tell us more about Thomas Hyland'? Some additional facts, a small story handed down through the family or perhaps a picture or an heirloom you can share online. Contact our curator...