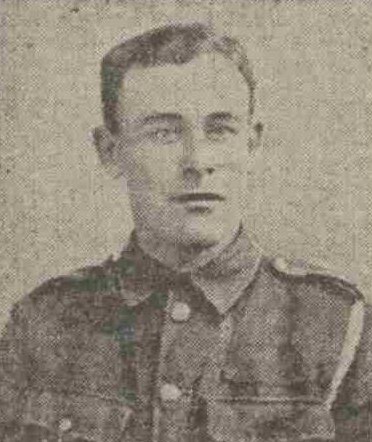 Andrew has no known grave but is remembered on the Helles Memorial.

Petty Officer Andrew Ireland, of the Royal Naval Division, a “People’s Journal” employee, who has been killed in action near the Dardanelles.  P.O. Ireland was well known in the city.  He was closely identified with the Y.M.C.A. movement, and was a keen athlete.

FALLS IN THE FIGHTING IN THE DARDANELLES.

Yesterday the brief and poignant announcement that Petty Officer Andrew Ireland of the Dundee Contingent of the Royal Naval Brigade, had been killed in action at the Dardanelles was received by his relatives who reside at 6 Peddie Street.

Andrew Ireland was as brave and gallant a lad as even answered the call of his King and country.  When the news of his death reached the “Dundee Advertiser” Office, where he had been employed for nearly seven years, there was universal sorrow, writes one of his colleagues.  To his own immediate circle in the caseroom it came with a deep sense of personal bereavement, for Andrew was popular alike among old and young.  The staffs of Messrs John Leng & Co., have followed the deeds of their friends in the service with pride and admiration.  In none of them were they more deeply interested than in Andrew Ireland, for he was the happy possessor of an engaging personality which attracted all who knew him.  A diligent and enthusiastic worker, he was equally diligent and enthusiastic in all the interests of his manly young life.

Beyond the ties of his home and his office, his devotion to the Royal Naval Reserve Volunteers was probably his master passion.  When Andrew, laying aside his civilian clothes, donned the navy blues, he made a fine figure of a sailor, and on board the Unicorn, in the early days of the war, the pride in his corps and in his work, which stimulated his every energy, was an inspiration in patriotism.  The first rude shock of war came to the Unicorn lads in the ghastly disarray of the retreat from Antwerp, but the sailor soldiers stood the test of endurance well, proving their mettle as men of action.  Among them who came back to Dundee from that historic retreat was Andrew Ireland, by that time grimly alive to the horrors of war.  With the reticence of a true soldier, Andrew spoke little of his life or work either on board ship or in camp, but every officer under whom he served spoke enthusiastically of his many fine qualities.  In every relation of life he displayed a manly strength and virtue which were inborn in him.  None who came in contact with him failed to form an admiration for his genuineness of character and his frank and modest bearing.  His, indeed, is a cruel example of a life cut off prematurely, to the whole-hearted grief of all who knew him; but humble as was his role in relation to the great events of to-day, the example of his life and death shines out with the brilliant radiance of an exalting inspiration.  To him, in the peace of his lonely distant grave, may be respectfully tendered the epitaph which he would have appreciated.  “He did his duty.”  And in that thought must his relatives and his many colleagues and friends find consolation in their sorrowing hearts.

HOW “JOURNAL” EMPLOYEE MET HIS DEATH.

Further particulars regarding the death of Petty Officer Andrew Ireland, of the Dundee Contingent of the Royal Naval Division, and the third member of the “People’s Journal” staff to fall are contained in a letter which has just reached his relatives at 6 Peddie Street from a comrade who was with him at the end.  The writer is C. Churcher, and his letter reads as follows :–“As I was with Andrew at the time he died I take this opportunity of letting you know how he met his end.  Last Thursday Andrew and I had just had tea, and were talking, when some one remarked that a big shell had just burst.  As we turned to look Andrew lifted his head and met the bullet that killed him.  He died almost at once, being struck in the centre of the forehead, and did not speak again.  Andrew fell back in my arms, and I held him until he died.  He was the only one I chummed with.  We shared our blankets and food together, and I can’t say how much I miss him.  I know words are of no use at such a time, but I and all who knew Andrew feel for you, and send our sincerest sympathy.”

Andrew`s father, also Andrew, was a watchmaker and the family lived at 2 Church Street, St Andrews. His father died before the war and his mother later remarried living at 1 St Peter Street, Dundee. Andrew joined the People`s Journal in 1908, aged 18,and lived at 6 Havelock Place, Peddie Street, Dundee.

Andrew joined the RNVR onboard HMS Unicorn pre war and served at the defence of Antwerp in 1914 before going to the Dardanelles with the Hood Battalion in early 1915. Just prior to the 3rd Battle of Krithia at the beginning of June 1915 Andrew was struck on the head by a shrapnel bullet from a bursting shell and died shortly afterwards. His body was buried at the back of a trench used by the Anson Battalion but could not be found after the war. Poignantly a postcard which he sent to his mother from Antwerp was received after the armistice in December 1918.

Can you tell us more about Andrew Ireland'? Some additional facts, a small story handed down through the family or perhaps a picture or an heirloom you can share online. Contact our curator...