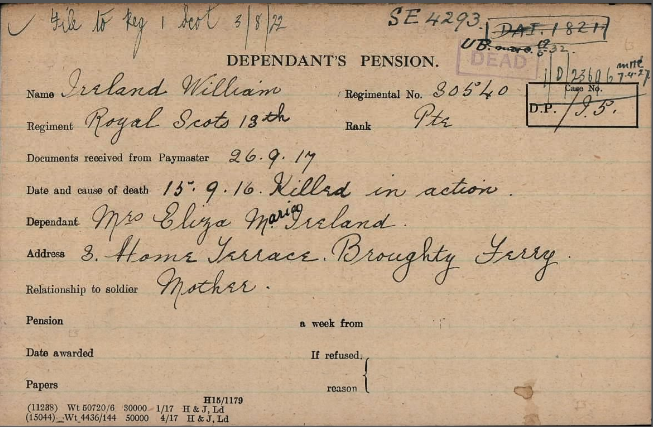 William was a former pupil of Grove Academy, Broughty Ferry and is remembered on the schools war memorial.

Monifieth golfers will learn with deep regret that Private William Ireland, of the Royal Scots, was killed in action on 15th September.

He was the son of the late Mr James Ireland, agent of the British Linen Bank at the West Port branch, and of Mrs Ireland, 3 Home Terrace, Broughty Ferry.

Private Ireland was 36 years of age, and was previously employed as a clerk in the British Linen Bank, Murraygate.  He enlisted under the Derby scheme in December 1915, and was called up at the end of March.  He joined the Royal Scots, and went to the front at the end of July.

“Willie” Ireland was one of the best known and most respected of Monifieth golfers, and as a member of the Grange Club figured prominently in many competitions.

Can you tell us more about William Ireland'? Some additional facts, a small story handed down through the family or perhaps a picture or an heirloom you can share online. Contact our curator...