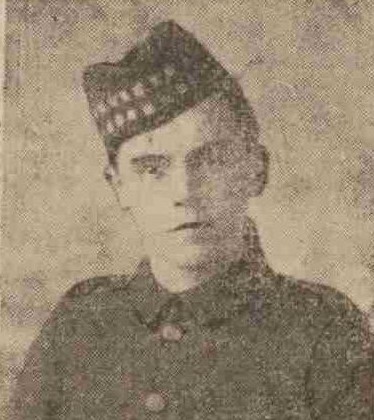 Mr and Mrs Irvine, 45 Dens Road, Dundee, are mourning the death of their son, Signaller David Irvine, of the Bantam Battalion of the Royal Scots, official news having reached them stating that he died from the effect of wounds received on 30th July.  Private Irvine was transmitting messages, when a shell landed in the dug-out killing one man outright and dangerously wounding Private Irvine, who was taken to the base hospital, but succumbed to his wounds shortly after the first dressing had been applied.  Twenty years of age, Signaller Irvine joined the Royal Scots last April, and proceeded to the front about six months ago.  Previous to enlistment he was employed by Mr D. J. MacDonald, Dundee, as an electrician.  Mrs Irvine has a son in India, where he is drilling in a volunteer corps.

Can you tell us more about David Irvine'? Some additional facts, a small story handed down through the family or perhaps a picture or an heirloom you can share online. Contact our curator...