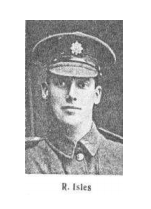 Private Isles was killed by a bomb from a German aeroplane. He was studying for the teaching profession at Dundee Training College when war broke out. He enlisted in January 1916 and had been at the front for about 17 months.

Pte. Robert Isles, of the Scots Guards, who was killed in action on the 14th inst., was the youngest son of Mrs Isles 153 Lochee Road. Dundee.

Twenty years of age, Pte. Isles, who was a former pupil of Morgan Academy, was studying for the teaching profession at Dundee Training College when war broke out.  He enlisted in January, 1916, and had been at the front for about seventeen months.

Writing to Mrs Isles, Lieut. Arthur Kinnaird, his company officer, states :–“Your son was a very gallant soldier and very popular in the company, and we shall all miss him.  He was buried yesterday in a cemetery close at hand, and you can rest assured that his grave will be well looked after.”

Can you tell us more about Robert Isles'? Some additional facts, a small story handed down through the family or perhaps a picture or an heirloom you can share online. Contact our curator...