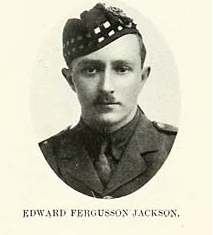 A student in University College, Dundee, Edward Jackson enlisted early in the war and saw much fighting both in Flanders and Palestine. He was wounded in the battle at “Hill 60”, Flanders, 1 December 1915. On rejoining his Battalion he was transferred to the East and took part in the capture of Samarra and Tekrit, Mesopotamia. He was again wounded near Beit Lidd, Samaria, Palestine, and died at the early age of 23. “He was awarded the Military Cross for great gallantry, energy and coolness at Beit Lidd on 20th September 1918. He led his company in the attack on a position strongly held by machine guns. All the leading men of his company were killed or wounded, and the attack held up; but he, accompanied by his orderly, went forward with a Lewis gun,which he continued to fire with great coolness until severely wounded. His fine example of gallantry and devotion to duty was a source of inspiration to his men, and was largely responsible for the ultimate success of the attack.”

Intimation has been received that Lieutenant Edward F. Jackson, Seaforth Highlanders, has died from wounds received in action on 21st September.

Lieutenant Jackson, who is 23 years of age, was the only son of Mr Robert Jackson, 16 Bingham Terrace, Dundee.

Lieutenant Edward Ferguson Jackson, who has been posthumously awarded the Military Cross, was the only son of Mr Robert Jackson, lecturer in phonetics, Dundee Training Collage.  Lieut. Jackson was educated at Waid Academy, Anstruther and Morgan Academy, Dundee.  When war broke out he was a lance-corporal in the O.T.C., Dundee University Collage.  He obtained his commission in the Seaforth Highlanders in November 1914.  Wounded at Hill 60 in December 1915, he joined the Mesopotamian Expeditionary Force after recovery, and was for a time attached to the staff of Brig.-General Wood.  He took part in the captures of Samarra and Tekrit.  Lieut. Jackson was thereafter transferred to the Egyptian Expeditionary Force, and during the organisation of General Allenby’s great push he was engaged on brigade work, but, at his own request returned to his company when the battle began.  “The battalion was ordered to attack a very strongly held position that covered the retreat of the enemy, and was held by Germans with a number of machine guns which they used with great effect.”  In the attack Lieut. Jackson was seriously wounded on 20th September near Beithid, four miles west of Samaria.  He died two days later, on September 22nd.

Can you tell us more about Edward Ferguson Jackson'? Some additional facts, a small story handed down through the family or perhaps a picture or an heirloom you can share online. Contact our curator...