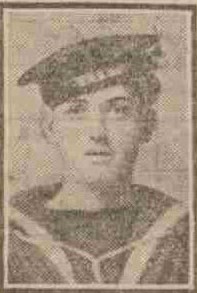 Frederick was serving aboard H.M.S. Magic, a Destroyer, which was severely damaged when she struck a mine laid by German Submarine UC-31, 1.5 miles E.N.E. of Fanad Head with the loss of 25 lives.

Mr and Mrs T. Jackson, 264 Hilltown, Dundee, have been notified of the death as the result of an explosion of their third son, A.B. Fred Jackson, Royal Navy.  A.B. Jackson, who was 20 years of age, entered the navy at the age of fifteen, and had seen much active service during the war.  A brother is in the King’s Royal Rifles, having come over from Africa to enlist.

Can you tell us more about Frederick Thomas Jackson'? Some additional facts, a small story handed down through the family or perhaps a picture or an heirloom you can share online. Contact our curator...