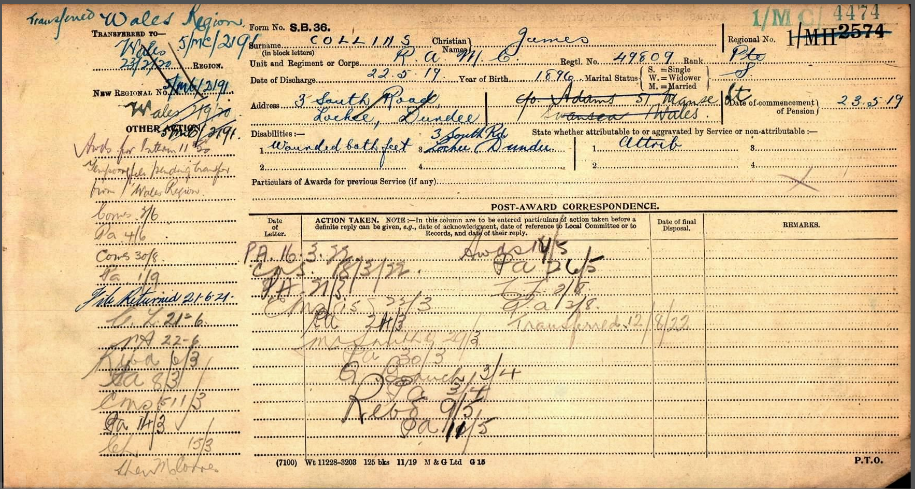 His wounding is particularly notable; Private James Collins ‘was severely wounded by a primed grenade dropped by a runaway lunatic soldier at an advanced dressing station, while attempting to bring the man to safety’.  For this brave and selfless act, he was awarded the Albert Medal in Gold. This medal, since abolished in 1972, was the equivalent to the George Cross, second only to the Victoria Cross.

Collins was initially treated for his wounds in France, thereafter he was transferred to the War Brook Hospital in Woolwich in December 1918. He was subsequently awarded a disability pension with 20% disability in April 1919 and discharged. Interestingly, both his medical records and disability award letter refer to gunshot wounds to both feet – however it is likely that these were not gunshot wounds, but instead wounds from the shrapnel of the exploding grenade.

Prviate Collins lived in Dundee for a few months pot-war then moved to Swansea.

Corporal J. Collins, of the R.A.M.C., was presented by the King at Buckingham Palace on Saturday with the Albert Medal in gold in recognition of a very gallant action performed by him four months ago.  Corporal Collins, or Private Collins, as he was then, came upon a demented soldier in a trench with a grenade in his hand, and in order to save the life of the poor fellow, as well as those in the immediate vicinity, he closed with the man, who had removed the pin of the grenade.  Collins put his foot on the fuse, but the grenade exploded, killing the demented soldier outright, and so severely wounded Collins in the foot that he has been in hospital ever since.

Corporal Collins is a son of Mrs J. Collins, 3 South Road, Lochee, who was present at Buckingham Palace and witnessed her son being decorated.

Can you tell us more about James Collins'? Some additional facts, a small story handed down through the family or perhaps a picture or an heirloom you can share online. Contact our curator...