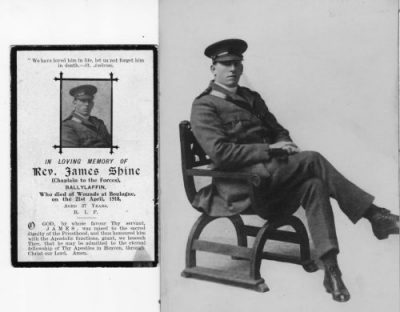 For reasons unknown James is not listed in the original Dundee Roll of Honour. James was Parish Priest of St. Joseph’s Dundee. His parish priest at St Joseph’s was Right Rev. Joseph Holder, Vicar General of the Diocese of Dunkeld. Fr. Holder was an old man and he left the work of the Vicar general in the hands of Fr. James. In such position he had to contend with the Government of the day on many diverse matters such as the rights of Catholic Prison Chaplains in Dundee. He was very progressive in that he had his own typewriter that he bought on 28th May 1913. A contemporary account states….. “Perhaps the tallest priest in Scotland, he was a commanding personality, and with his homely, hearty Irish manner he had many friends in Perth, Lochee and St. Joseph’s Dundee, to whom he was attached during his detachment from his native Ireland. He was one of those willing disciples who so readily gave their service to the work of the Scottish Mission and his labours in Dunkeld Diocese were of a valuable and edifying nature”.

The Great War was raging in France and Fr. James, who was due to return home to the Waterford and Lismore Diocese, felt that his duty now lay in assisting the men engaged in that Imperial conflict. There was only 17 Catholic Chaplains in the Armed forces at this time. An urgent appeal was made for Chaplains in the Forces and on 7th Oct. 1915 Fr. James and a fellow priest Fr. John Stuart were appointed as Army Chaplains. From then he was Captain The Reverend James Shine, Commissioned into the Royal Army Chaplains Department. His address at that time was 39 Panton Street, Haymarket, Middlesex. His cheque book account shows that he lived in digs in London. It seems while undergoing Army Training as he was now to be commissioned as an officer in the Army. His bank account was based in McGregirs Bank which looked after army pay for officers.

On the first of June 1916 he entered France with the Middlesex Regiment. For two years he served in France experiencing the horror of war at first hand. He was stationed right in the heart of the Somme slaughter. He came home to Ballylaffin on leave of absence in July 1917 during this period. On his way from France he came through Waterford and spent the night in the Ursuline Convent saying Mass next day for the nuns and visiting his aunt Sr. Barbara Anglim.

He was a great favourite with the children while on holidays and he used to throw pennies into the air for them to scramble for. Alas, his brief visit came to an end and he returned to France never again to see home. His mother Mary fell and broke her hip and died in Feb. 1918 but he did not get home for the funeral.

Father James was wounded during Ludendorff’s Georgette offensive of April 1918, while ministering to the dying, under fire on the battlefield and was taken to hospital.

He died on 21st April 1918 at the Military Hospital, Boulonge, France whilst serving as Chaplain attached to 21st Battalion, Middlesex Regiment, aged 37 years.

The Glasgow Observer of May 4 1918 reports on his death as follows:- “Many hearts were sad in Dundee when it was learned that Fr. Shine had died of wounds received in the battlefield while ministering to the wounded and dying. In spirit he heard the voices of his wounded countrymen on the battlefield calling for his spiritual help that only a priest of God can give. So leaving the comparative comfort and security of work at home he answered the call and sought to serve his God and help his fellow man in a very inferno of German lead, where to remain unscathed would be a miracle . Fr. Shine made light of the leaden messengers of death from the reeking mouths of the enemy cannons and calmly knelt at the side of a dying man in order to send his soul clean and undefiled before its God. Injured severely, he lingered for a few days but his sturdy frame was unable to resist the effects of the blow he received. He died a hero’s death…….”

Can you tell us more about James Shine? Some additional facts, a small story handed down through the family or perhaps a picture or an heirloom you can share online. Contact our curator...