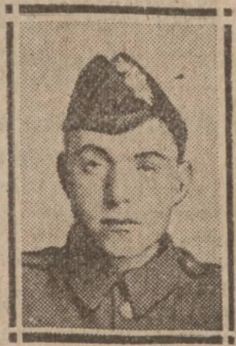 George has no known grave but is remembered on the Thiepval Memorial.

VICTIM OF GERMAN SHELL.
Pte. George Jamieson, Black Watch, son Mr Thomas Jamieson, 28 Fleuchar Street, Dundee, has also been killed in action. A letter has been received from a comrade of the deceased, in which it is stated that Private Jamieson was killed as the result of the bursting of a German shell in the trench which his regiment occupied. He lived for only about twenty minutes after the explosion. Private Jamieson was in the firing line for fourteen months. Prior to enlistment he was employed by Messrs John Sharp & Sons, Ltd., Bower Mill, Dundee. A brother in-law of Private Jamieson was killed some time ago.
Dundee Courier 10 August 1916

Can you tell us more about George Jamieson'? Some additional facts, a small story handed down through the family or perhaps a picture or an heirloom you can share online. Contact our curator...