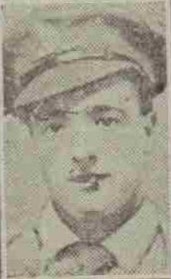 Bombardier John Gardiner, R.F.A., whose mother and sister reside at 208 Seagate Dundee, has been awarded the Military Medal for “conspicuous service during the campaign.”  The gallant Bombardier, though quite young in years, is a hardened campaigner, having been through every big battle on the Western Front, including the glorious retreat from Mons.  A native of Glasgow, Bombardier Gardiner, was a soldier when war broke out, and he proceeded to the front with the original Expeditionary Force.  He was wounded at Vimy Ridge in April of this year by shrapnel, and has now rejoined his unit after a well- earned rest in Blighty.  A brother, Private Andrew Gardiner, Cameron Highlanders, was killed in action in June of last year.

Can you tell us more about John Evans Gardiner'? Some additional facts, a small story handed down through the family or perhaps a picture or an heirloom you can share online. Contact our curator...