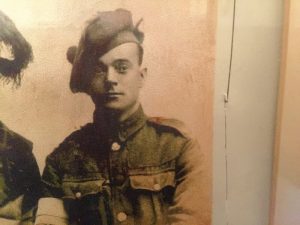 John Martin enlisted on the 4th of August 1915 as #26358 of the 5th Company of the 3rd (Militia) Battalion Royal  Scots. He is trained at Glencorse (where he has some disciplinary problems) before being posted to France on the 15th of December 1915 as part of a draft to join the 11th Battalion.

The diary of the 11th Battalion shows that it had been in France since the spring of 1915 and had just come out of the trenches to a period of training when John joined them. The 11th Battalion goes back into the line at Ploegsteert (‘Plugstreet’ to the British) on the 27th of January 1916 and the diary mentions that enemy snipers were active. John is wounded in action (gunshot wound left shoulder) on the 28th of January 1916 and evacuated via the hospital chain until released back to the base infantry depot at the end of February 1916. He would have rejoined his battalion shortly thereafter.

A note at the bottom of his disciplinary form states that he was with the GHQ 1st Echelon, attached No.3 Infantry Base Depot from 20th of December 1916 and there is no indication that he left that unit until his discharge in 1919. John sits through a medical in 1920 to access a degree of invalidity, but the board decides that his wound does not affect his ability to earn a living, so no award is granted.

According to a family member, John died aged 27 from lung disease, possibly caused by being gassed whilst in the trenches.

Can you tell us more about John Martin'? Some additional facts, a small story handed down through the family or perhaps a picture or an heirloom you can share online. Contact our curator...