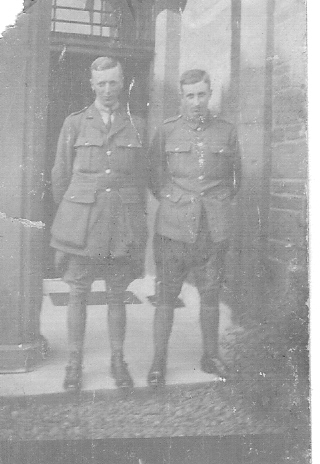 Francis is not listed on either C.W.G.C. or S.D.G.W. databases but was remembered on the Hawkhill Church War Memorial. Four of his Seven brothers  served during the Great War. Gunner David Murray Kennedy Johnston, Royal Garrison Artillery was a P.O.W. but survived, Cpt (Doctor) John McPherson Johnston was a doctor with R.A.M.C. he also survived. Cpt Peachy Wilson Johnston, Royal Field Artillery was awarded the Military Cross during the war and also survived. Lt Walter Robertson Johnston 112th Brigade, Royal Field Artillery, was killed in action 6 September 1918. Both Francis and Walter are remembered on the Morgan Academy Roll of Honour.

Francis was educated at Morgan Academy Dundee. After leaving school, he was for a time training as an architect with Leslie Ower the Dundee Architect just as his brother Walter had done. Francis or Frank seems to have given that up and wanted to farm. He was in fact the tenant of the small farm of Easter Clepington, the buildings of which are now Clepington Road Antiques Centre. Frank had no desire to be a soldier and as a farmer, he should have been exempt from enlistment. For some reason, he seems to have been unable to get the necessary exemption forms from the Dundee Town Clerk’s Office at the correct time and these forms were submitted late. There was a tribunal about this on the 5th February 1917 in which Frank was appealing against his enlistment, but his appeal was thrown out and Frank had to enlist.

Francis served as a Gunner was badly wounded whilst on active service and was invalided back to the U.K. He returned to Dundee and was never out of hospital or nursing home and sadly died on the 29th November 1919, in the Central Nursing Home, 6 Union Tce, Dundee.

Can you tell us more about Francis Johnston'? Some additional facts, a small story handed down through the family or perhaps a picture or an heirloom you can share online. Contact our curator...