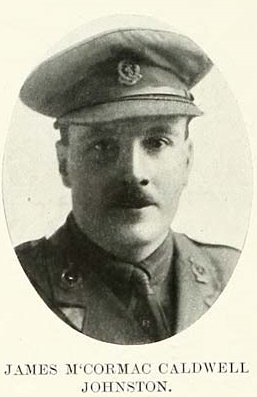 Lieutenant James McCormac Caldwell Johnston was attached to the 3rd battalion of the Worcestershire Reigment when he was killed in action on 27th May 1916.

Lieutenant James MacCormac Caldwell Johnston, Royal Army Medical Corps, was killed in action, attached to the 3rd Worcestershire Regiment, on 27 May 1916. He was 32, and the son of Robert Johnston, M.B.C.M, and Helen Mitchell McCormick. He is buried in Ecoivres Military Cemetery, Mont-St. Eloi, Pas de Calais, France, II. E. 6.

DUNDEE DOCTOR KILLED. Dr Robert Johnston, 144 Nethergate, Dundee, has received official intimation of the death in action of his elder son, Lieutenant James A. [sic] C. Johnston, of the Royal Army Medical Corps, who was attached to the Worcestershire Regiment. Lieutenant Johnston, who was about 32 years of age, was educated at Dundee High School, Edinburgh University, and St Andrews University. He graduated M.N., Ch.B., at St Andrews. After a year as house surgeon in Dundee Royal Infirmary he began practice in Perth, where he was engaged when war broke out. Lieutenant Johnston received his commission in August 1915. The Scotsman, Tuesday, 30 May 1916, 6.

Can you tell us more about James McCormac Caldwell Johnston'? Some additional facts, a small story handed down through the family or perhaps a picture or an heirloom you can share online. Contact our curator...