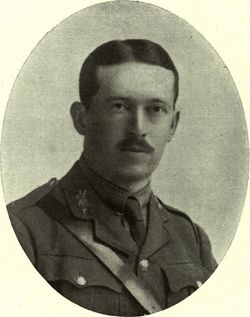 Robert has no known grave but is remembered on the Tyne Cot Memorial. Both C.W.G.C. & S.D.G.W. record this mans surname as Johnstone.

Lieutenant Robert J. H. Johnstone, of the Black Watch, who is reported missing since 26th September, was formerly on the staff of the Northern Assurance Company, Limited, Commercial Street, Dundee.

He was mobilised as a Territorial on the outbreak of war, was commissioned in October, 1914, and went to the front in January last.  Mrs Johnstone resides at 4 Panmure Street, Dundee.

Can you tell us more about Robert James Halliday Johnstone'? Some additional facts, a small story handed down through the family or perhaps a picture or an heirloom you can share online. Contact our curator...