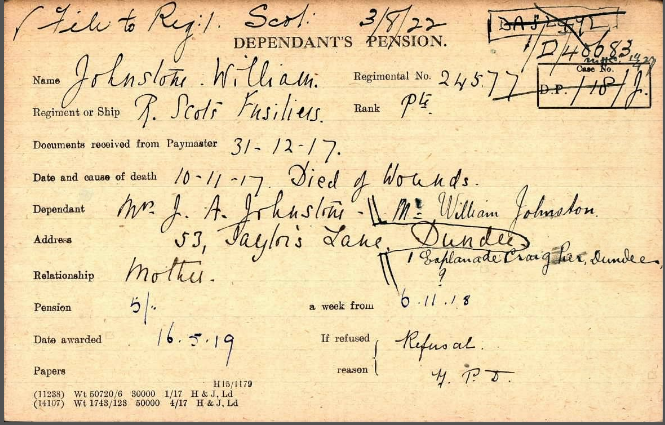 William Johnston enlisted in Ayr on 22nd June 1916 although, at this time, he was working in Dundee. He was 18 years, 125 days when he listed and his military records show he was 5ft 8.25″ and had a scar on his cheek. Prior to enlisting he was an Apprentice Architect with Messers John Bruce and Sons, based in Whitehall Street, Dundee. His father, William Johnston, was an Inspector of Tay Ferries.

Deceased, who was twenty-three years of age, had prior to joining the forces served his apprenticeship with Messrs John Bruce & Son, architects, Whitehall Street, Dundee.

Can you tell us more about William Johnston'? Some additional facts, a small story handed down through the family or perhaps a picture or an heirloom you can share online. Contact our curator...