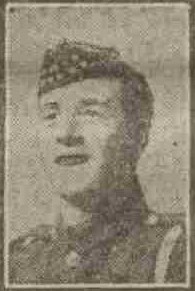 Driver G. A. Johnston, A.S.C., who was the third son of Mr and Mrs Johnston, 15 Forest Park Road, has died from pneumonia following influenza.  Driver Johnston enlisted in the Seaforths in February, 1916, and proceeded to France in August of the same year.  He was buried alive at the Somme in September, 1916, but was rescued, and came home to recuperate.  He returned to France in May, 1917, and was sent home suffering from shell shock the following month.  Deceased was transferred to the Royal Scots, and afterwards to the A.S.C.  In civil life he was employed with J & P. Cameron, carting agents for the N.B. Railway.

Can you tell us more about George Alexander Johnstone'? Some additional facts, a small story handed down through the family or perhaps a picture or an heirloom you can share online. Contact our curator...