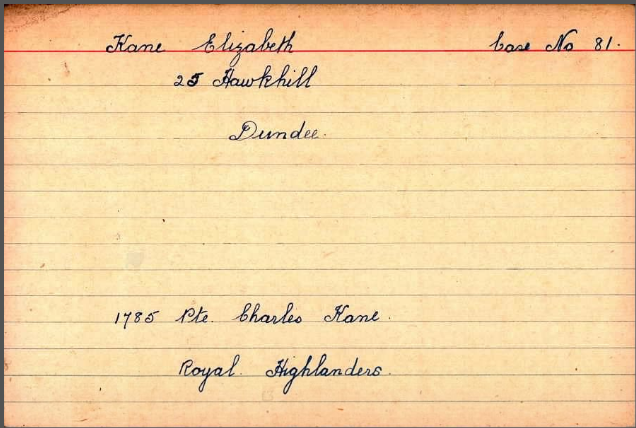 “Don’t cry ; I’ll come back.” These were the parting words of Pte. Charles Kane, of the 1st Black Watch, to his wife on leaving Dundee for the front.  He will never come back.  On Saturday Mrs Kane, who resides at 25 Hawkhill, received official intimation from the War Office that her husband was killed in action at La Bassee on 25th January.  Private Kane, at the outbreak of hostilities, was a member of the 3rd Black Watch, and his fourth year would have been terminated in May, but, previous to joining the regiment, he served in the Argyll and Sutherland Highlanders for twelve years.  In civil life he was employed at Dundee West Station goods yard.  Private Kane went through the Boer War without receiving a scratch, and held two medals and five bars.  He leaves a widow.

Mrs Kane’s brother, Private Bernard M’Govern of the 1st Cameron Highlanders, has been missing for the past fifteen weeks.

Can you tell us more about Charles Kane'? Some additional facts, a small story handed down through the family or perhaps a picture or an heirloom you can share online. Contact our curator...