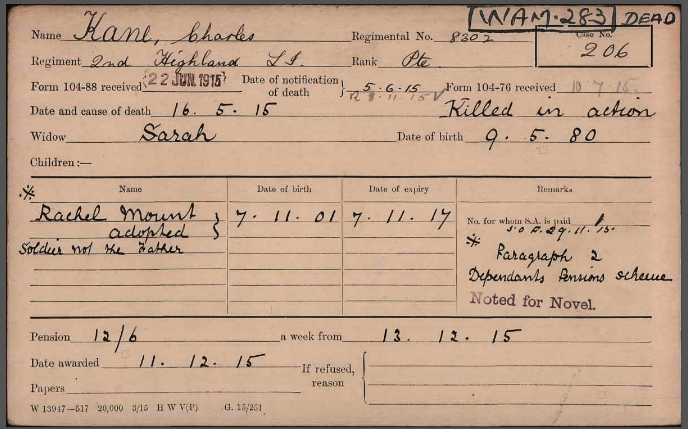 KILLED IN BOMBARDMENT OF TRENCH.

Mr Kane, who resides at 143 Lochee Road, Dundee, has received official intimation that his son, Private Charles Kane, of the 2nd Battalion Highland Light Infantry, was killed in action on 16th May.

A comrade writing to Mr Kane states that his son was killed in a bombardment of their trench by the Germans.  Private Kane who was 34 years of age, served eight years in India as a member of the 1st Black Watch, and on the outbreak of war he attached himself to the Highland Light Infantry.  Private Kane was employed for some time as a mill-worker by Cox Bros., Camperdown Works, Lochee.  He was married, and leaves a widow.  Mr Kane has another three sons serving the colours.  One is a member of the 1st Black Watch, and the other two are in the Highland Light Infantry.

Can you tell us more about Charles Kane'? Some additional facts, a small story handed down through the family or perhaps a picture or an heirloom you can share online. Contact our curator...