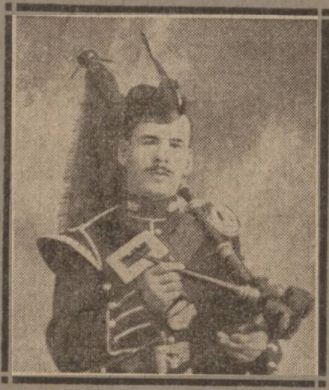 EIGHT YEARS IN THE ARMY.
Private John Kane, Royal Scots, son of Mr Joseph Kane 10 Hunter Street, Dundee,has died of wounds. He was a regular soldier, having joined the army when he was 18 years of age. Private Kane was in India for six years, and occupied the post of piper for some time.

He came from India with the first contingent, and had been at the front for almost two years. His brother Joseph is in the Scottish Rifles.

His father, by way of showing his patriotism, volunteered for service on the outbreak of war.
Dundee Courier 10 August 1916

Can you tell us more about John Kane'? Some additional facts, a small story handed down through the family or perhaps a picture or an heirloom you can share online. Contact our curator...