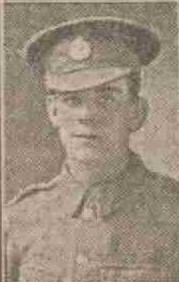 Sapper Alexander Kean, of the Royal Engineers, whose parents reside at 60 Strathmartine Road, has been killed.  Deceased soldier was 21 years of age, and prior to the war was employed with Mr John Dunlop, engineer and blacksmith, Rosebank Street.  He had been about seven months at the front.

Can you tell us more about Alexander Kean'? Some additional facts, a small story handed down through the family or perhaps a picture or an heirloom you can share online. Contact our curator...