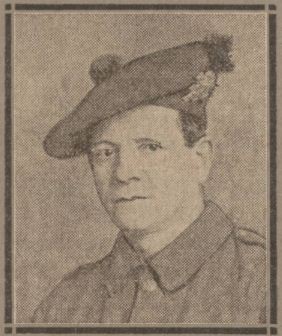 Private William Keen, who was mentioned in despatches on Saturday, whose wife resides at 68 Ann Street, Dundee.  He is a son of Mr J. Keen, dealer, Dudhope Street.  His brother James is at present serving with the Canadian Contingent.  Private Keen joined the local Territorials, shortly after the war broke out, and since going to France with his battalion he has earned the greatest respect of his comrades for his bravery on several occasions.

A DUNDEE HERO FALLS.
MENTIONED SEVERAL TIMES IN DESPATCHES.
Corporal W. Keen, Black Watch, who was several times mentioned in despatches for heroism on the battlefield, has made the supreme sacrifice.

Corporal Keen, who is a son of Mr James Keen, 41 Cowgate, Dundee, resided at 68 Ann Street. He was a bomber for some time, and was promoted on the field to the rank of corporal. In a sympathetic letter to Mrs Keen, Major S. M. Milligan, of the Black Watch, states that he was greatly impressed by Corporal Keen’s kindly nature and his brave actions.

He was greatly loved by all his comrades, and was a favourite with all.

Can you tell us more about William Keen'? Some additional facts, a small story handed down through the family or perhaps a picture or an heirloom you can share online. Contact our curator...