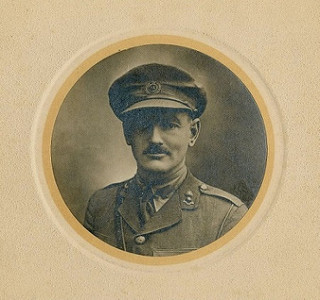 At the outbreak of war deceased was engaged as a railway engineer in China, and, returning to this country, joined the Inns of Court O.T.C.  On receiving his commission in the Royal Engineers, he proceeded to France early in 1916, and was there until the armistice was signed, when he was transferred to Staff Headquarters at Cologne.

Captain Keiller, who was 36 years of age and unmarried, was home on leave in December last.  Before taking up his engineering engagement in China he was for three years in West Africa engaged on the Government Railway in Northern Nigeria.

Can you tell us more about George Westson Keiller'? Some additional facts, a small story handed down through the family or perhaps a picture or an heirloom you can share online. Contact our curator...