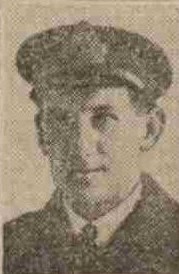 David was serving aboard S.S.Burutu which was a British Merchant steamer of 3,863grt built in 1902 and owned by the Elder-Dempster Line. On 3 October 1918 she was sunk when she collided with S.S. City of Calcutta when off the coast of South Wales about 25 miles SW of Bardsey Island, With the  loss of 148 lives. She was on route from Freetown for Liverpool with passengers and a general cargo.

Official intimation has been received that Mr David M. Kennedy, second officer of the Burutu, was drowned when that vessel was lost.  Mr Kennedy had been ten years at sea, and had the reputation of being a skilful navigator.  He served his apprenticeship in the Den Line.  Mr Kennedy was the younger son of Mr and Mrs Wm. Kennedy, 14 Thomson Street, Dundee.

Can you tell us more about David Morrison Kennedy'? Some additional facts, a small story handed down through the family or perhaps a picture or an heirloom you can share online. Contact our curator...