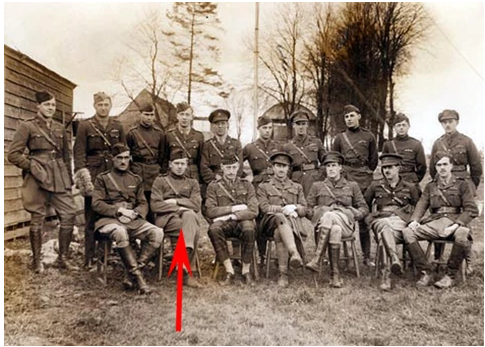 Douglas was the brother of Cpt Colin Gillies Kennedy of the South African Special Service Company who died 21.10.1918. Douglas was killed in action whilst piloting his Bristol F2B B1247.

After earning his flight wings, 2nd Lieutenant D.S. Kennedy was stationed to 62 Squadron of the Royal Flying Corps where he quickly distinguished himself as one of the best pilots of the squadron. As the other members of the squadron, Kennedy flew the Bristol F.2b fighter with Lieutenant Hugh Goddard Gill as his observer. On July 18th 1917, Kennedy earned the award of Military Cross for gallantry in combat. His award citation reads as follows:

While on a close patrol he attached three hostile scouts and succeed in dispersing them. A second formation of four enemy machines then attacked, but were also dispersed, two of them being driven down. The result of the combat was largely due to his skill and determination.

By spring 1918 Kennedy had risen to the rank of Captain and Flight Commander. While on patrol in the area of Cambria, France, at about 11am on March 12th, 1918, Kennedy fired a red Very light which was the signal to his flight to prepare for action. While tracking three enemy planes bowl the flight, they were suddenly pounced on from above by approximately 20 Hun machines. The pilots and observers

in the flight could tell by the red undercarriage of the Hun planes that they were of the famed Von Richthofen’s Flying Circus, also known as The Red Baron.The red Albatross D.111’s attached the 62 squadron planes with ferocity. Two red Albatross planes, one flown by Lothar Von Richthofen younger brother to the famed Red Baron Manfred Von Richthofen, and the second flown by Lieutenant Werner Steinhauser attacked Kennedy’s Bristol. It was reportedly Steinhauser that mortally wounded Kennedy’s Bristol fighter. Later eye witness accounts from the other pilots of the 62nd squadron would report seeing Kennedy’s plane in flames and both Kennedy and Goddard jumping from the aircraft to their deaths. Three months later on June 26th, 1918 Lt Werner Steinhauser would crash to his death during combat.

Can you tell us more about Douglas Stewart Kennedy'? Some additional facts, a small story handed down through the family or perhaps a picture or an heirloom you can share online. Contact our curator...