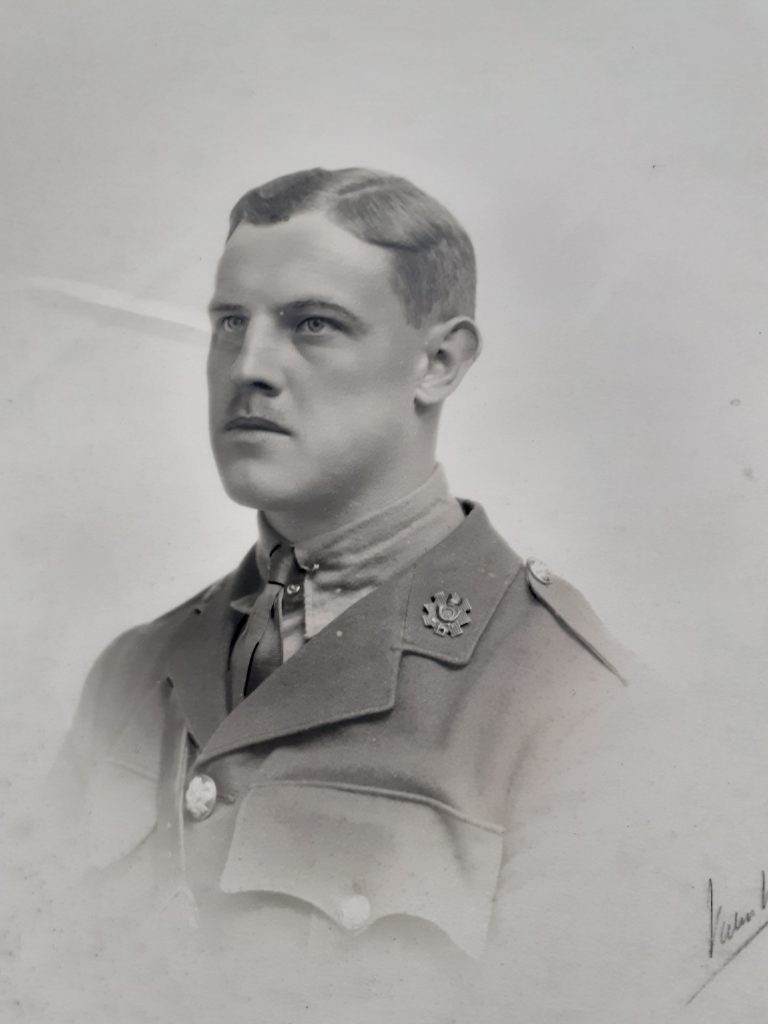 Second Lieutenant Jame Kerr was one of three brothers who fought in the First World War. He was killed in action on 01/07/1916. He was previously employed by the International Banking Corporation, Yokoshama, Japan.

A Banker in Yokohama, Japan, when the war broke out, Lieutenant Kerr returned home and early in the war enlisted in the 16th HLI. After his death, the Major of his Battalion in a letter to his father, wrote: “Your son’s Company, “A”, was the directing one in the main attack in the battle of the Somme, and he was last seen gallantly leading his platoon into the enemy trenches. What actually happened in the trenches we cannot say, as no one came back.”

His commanding officer has written a letter to his father stating that he was last seen gallantly leading his platoon into the enemy trenches.  What happened no one could exactly say, as no one came back at the end of the day to report.

The letter proceeds:__”I read in the French papers that the Boches claim to have captured 48 British officers, and it is possible he may be among those, although he was one of the sort who would prefer to fight to the last.”

Captain Kerr was educated at the Morgan Academy, and after serving with the British Linen Bank for some years entered the employment of the International Banking Corporation, London, and spent five years at the branches at Bombay, Calcutta, Singapore and Yokohama.

On leaving a year ago to do his bit, the Japanese staff presented him with a beautiful inlaid sword.  On presenting himself at the War Office he was appointed a second-lieutenant in the H.L.I.

Mr James S. Kerr, 32 Argyle Street, Dundee, has received official intimation that his eldest son, Second-Lieutenant James Kerr, of the Highland Light Infantry, who was previously reported missing on 1st July, was killed in action on that date.

Second-Lieutenant Kerr, who was 26 years of age, was a banker by profession and sacrificed an important appointment with the International Banking Corporation, Yokohama, to come home to serve his country.  He took a prominent part in athletics, and was an accomplished player of Association football.

Mr Kerr has other two sons with the colours.  Lieutenant Murray Kerr is in the Royal Scots.  He enlisted as a private in the Black Watch.  Private William R. S. Kerr is with the H.L.I.

Can you tell us more about James Kerr'? Some additional facts, a small story handed down through the family or perhaps a picture or an heirloom you can share online. Contact our curator...