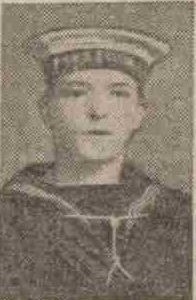 Died at 9.15am aboard Hospital Ship “Canada” at Malta from Enteric.

Mr David Kidd, baker, 8 Strathmartine Road, Dundee, has received intimation from the Naval Record Office in London of the death of his youngest son, Able Seaman David Kidd, of the Clyde Division, R.N.V.R.

Seaman Kidd, who was a member of the Hood Battalion, died in hospital at Alexandria on 29th August from enteric.  He was at Antwerp, and after being home went to the Dardanelles, where he was seized with illness.

Seaman Kidd was 21 years of age, and had been a member of the R.N.R., for about fifteen months.  He served his apprenticeship  as a baker, but before the outbreak of war was employed at Fairmuir Turning Works.

David`s father, also David, was a baker and the family lived at 4 Commercial Street and then 55 Strathmartine Road, Dundee. David served his apprenticeship as a baker and then went to work at Fairmuir Turning Works.

David joined the RNVR onboard HMS Unicorn in February 1913.On the outbreak of war he enlisted in the Hood Battalion and served at Antwerp and then Gallipoli. He was wounded on 15th May 1915 fighting in the 2nd Battle of Krithia and on recovery fought in the 3rd Battle there. In August 1915 he became ill with enteric fever and was evacuated on Hospital Ship Canada, dying onboard in Malta port.

Can you tell us more about David Kidd'? Some additional facts, a small story handed down through the family or perhaps a picture or an heirloom you can share online. Contact our curator...