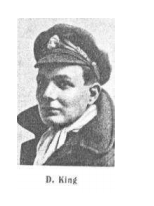 When war broke out Private King volunteered for coastguard duty as a Boy Scout. In 1915 he enlisted in the Royal Fusiliers (Sportsman’s Battalion) at the age of sixteen. For a year he was in France, but returning home he became ill and had to be treated at the War Hospital, where he died.

The death occurred to-day of Private David M. King, youngest son of Mr James King, Maryfield Dundee.  Private King, who was in his 19th year enlisted in the Royal Fusiliers in March, 1915, and six months later went to France.  He was allowed home on leave in January last, and during his furlough he was laid aside with illness, and had to be treated at the War Hospital.  His elder brother, Private John King, is serving with the R.A.M.C.

Many Dundee friends will regret to learn of the death of Private David M. King, Royal Fusiliers.  Private King, who was a son Mr James King, Maryfield, was before the war employed with the Dundee Corporation, and after the war broke out was on Coastguard duty with the Boy Scouts for a period.  He enlisted in March 1915, and went to the front in November of the same year.  Deceased returned to Dundee on furlough on 25th January, and was taken ill while on leave.  He was admitted to the Dundee War Hospital, where he died on Monday.  Deceased was only 19 years of age.

Can you tell us more about David Mitchell King'? Some additional facts, a small story handed down through the family or perhaps a picture or an heirloom you can share online. Contact our curator...