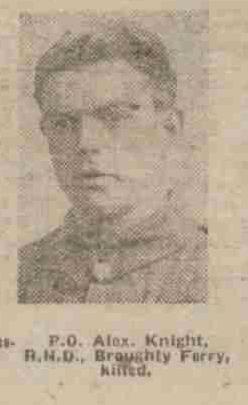 Alexander has no known grave but is remembered on the Arras Memorial. His address is also listed as 262 King St, Broughty Ferry.

Mrs Knight, Fort Street, Broughty Ferry, has been officially notified that her husband, P.O. Alexander Knight, R.N.D., was killed in action on 25th March.  Enlisting in January, 1915, he was wounded at Gallipoli, and was 24 years of age.  He has left a widow and one child.

Can you tell us more about Alexander Knight'? Some additional facts, a small story handed down through the family or perhaps a picture or an heirloom you can share online. Contact our curator...