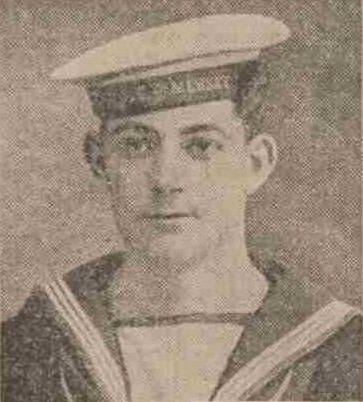 Alexander was serving aboard when on the 23 January 1917, the 14,892-ton liner Laurentic, which had been converted into an Armed Auxiliary Cruiser, hit a mine laid by German submarine UB-40 off the coast of Northern Ireland. In her strong rooms were 43 tons of gold, in 3211 separate gold ingots, valued then at more than £5 million, being taken to the United States to pay for food, steel, and munitions which Britain needed to continue the war against Germany. The Laurentic sank so swiftly that 354 of 745 men aboard were lost.

BROUGHTY A.B. LOST WITH THE LAURENTIC.

Mrs Annie Knight, 16 Fort Street, Broughty Ferry, has Received official information that her son, Able Seaman Alexander Knight, is not returned amongst the saved off the Laurentic, and therefore he is concluded to be drowned.

Seaman Knight joined the R.N.V.R. at the beginning of the war, and was in the Clyde Division (Hood Battalion) when Antwerp was taken by the Germans.  On his return home he was posted to the Laurentic, and had formed one of the crew for about two years.  He was seventeen years of age when he joined up.

Notification has been received by Mrs Knight, Fort Street, Broughty Ferry, that her son, Able Seaman Alexander Knight, had gone down with the Laurentic.  He was only 19 years of age, joined the Royal Naval Division on the outbreak of war, and went with that gallant corps to Antwerp.  Later he was sent to the Laurentic.  He was a fine manly lad of a bright disposition.

Alexander`s father, also Alexander, was a fisherman who died in 1910. The family lived at 16 Fort Street, Broughty Ferry.

Alexander joined the RNVR in April 1914 and then the Hood Battalion on the outbreak of war, serving at Antwerp. In October 1914 he transferred to sea service and then joined HMS Laurentic, an Armed Merchant Cruiser. Laurentic supported operations against the Germans in Cameroon, West Africa before patrolling in the Far East. Returning to the North Atlantic she ferried Canadian servicemen to Britain. On her final voyage she was on passage from Liverpool to North America with a cargo of £5 million gold bullion to pay Canada and the USA for war materials. On the night of 25th January 1917 she struck two mines ,laid by German submarine UB-40,off the Northern Irish coast and sank with the loss of 345 of the 745 men onboard, including Alexander.

Can you tell us more about Alexander Knight'? Some additional facts, a small story handed down through the family or perhaps a picture or an heirloom you can share online. Contact our curator...