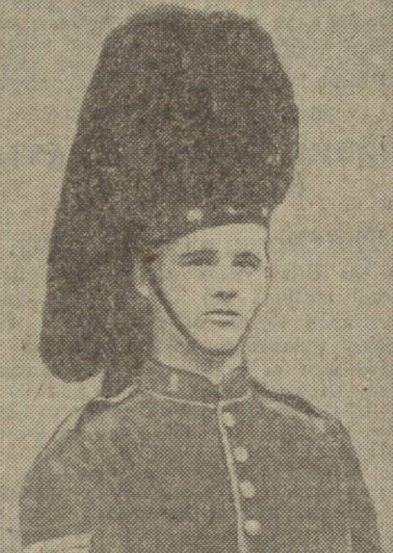 Confirmation of the death of 3-8540 Sgt. John Laing, 2nd Black Watch, appeared in the Dundee press on 21 July 1915. An employee of ‘The Courier’, Laing was a reservist recalled to the colours on the outbreak of war.
He had been listed as missing since the action at Aubers Ridge on 9 May 1915, but his death was finally reported by his brother, Pte. Harry Laing, who identified John’s body, and returned photographs to his wife Christina and two young children, Temple Lane, Dundee.
Sgt. Laing is commemorated on the Le Touret Memorial, Pas de Calais, France.A “COURIER” EMPLOYEE KILLED. BROTHER IDENTIFIES BODY ON BATTLEFIELD. Sergeant John Laing, 2nd Black Watch, a “Courier” employee, is officially reported as missing since 9th May, but the latest information to hand leaves little doubt that this gallant soldier was killed on that fateful day.
Mrs Laing, who resides with her two young children at 26 Temple Lane, has had a letter from a brother of Sergeant Laing – Private Harry Laing, of the same regiment – in which he states that an officer had asked him to identify the body of John, and he had done so. The brother took a couple of photographs from one of the pockets, and these have now been received by Mrs Laing. One was a photo of herself and the two children, and the other a photo of the children. Mrs Laing had heard it stated from several sources that her husband was killed, but as the Record Office intimation only posted him as missing she was trusting to hearing tidings of him in time.
Sergeant Laing was highly respected both as a soldier and also in civilian life. He was called up at the outbreak of the war, being a reservist. He was then employed in the caseroom of the “Courier.” He was 31 years of age, and altogether has had a fourteen years’ connection with the army. He had been at the front for the past six months. The sad news is keenly felt by his fellow-employees, amongst whom the Sergeant was extremely popular. The Evening Telegraph and Post, Wednesday, 21 July 1915, 4.

Can you tell us more about John Laing'? Some additional facts, a small story handed down through the family or perhaps a picture or an heirloom you can share online. Contact our curator...