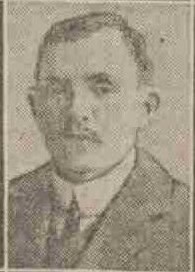 Still another of Dundee’s sons has made the supreme sacrifice.  PrivateWilliam Lamond, 5th (Angus and Dundee) Battalion Black Watch, was killed on the field of battle on 29th January last.

The Rev. George Thompson, chaplain to the Forces, attached to the 5th Black Watch, wrote to Mrs Lamond, who resides at 132 Lochee Road, explaining that her husband was shot in the head.  Following the usual custom, he was buried beside his comrades who had fallen in action.

“In the future,” the sympathetic letter continues, “it will be a source of pride to your children and yourself that your husband died in the discharge of his duty to his King, his country, and I believe, his God.  His example will be an inspiration to your children, which will help them to grow up conscientious and unselfish.”

Private Lamond was in his forty-first year.  He was employed as a hosepipe weaver by Messrs M’Gregor & Co., and joined the 5th Black Watch in September.  He had had no previous military service, and despite his years he felt he could not let the call of his King and country go unheeded, especially when many of his workmates enlisted at the same time.

Three weeks’ active service was all that Private Lamond saw.  He reached France on 9th January, and was killed on the 29th.  For 24 years he was a member of the Bonnie Dundee Lodge of the Royal Order of Ancient Shepherds.

He is survived by a widow and four children.

Can you tell us more about William Lamond'? Some additional facts, a small story handed down through the family or perhaps a picture or an heirloom you can share online. Contact our curator...