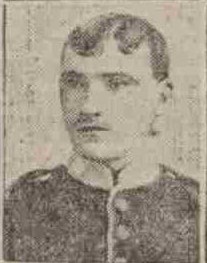 Not Dead, but Wounded.

Mrs Lavery, 74 Alexander Street, is experiencing the silver lining after the dark cloud.  A letter written by a Dundee soldier to a friend had a postscript which said, “I suppose you have heard that Lavery was killed.”  This was taken to refer to Pte. Peter Lavery, of the H.L.I., and information was conveyed to Mrs Lavery.  She had doubts, however, and held high hopes that her husband would be spared to her.  These were realised, as she received intimation from the War Office that her husband had been wounded in action.  The letter also bore the words. “Nature of wound is not stated, but understood to be a gunshot wound.”  Private Lavery is also a reservist, and before being called up was a labourer in Wallace Foundry.

Can you tell us more about Peter Lavery'? Some additional facts, a small story handed down through the family or perhaps a picture or an heirloom you can share online. Contact our curator...