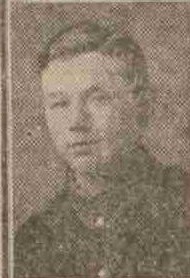 Corporal Archibald Niven Leitch was the elder son of the late Mr and Mrs Duncan Leitch, 12 Craigie Street, and he resided with his aunt, Mrs Kydd, 12 Craigie Street.  He was about 20 years of age, and enlisted when he was a little over 18 years old.  In training at Montrose and Invergordon, Corporal Leitch proved himself highly proficient, particularly in bombing, and when he went to France early this year, he held the rank of lance-corporal, promotion following after he had been a month in the field.  He took part in the severe fighting of 21st March, and in the beginning of September he was slightly gassed.  He was killed in action on 29th September.

Corporal Leitch was a high-spirited, fearless soldier.  He entered the “Courier” Office as a boy, and by his death on the field the promising career of a most genial and attractive young man has been ended.

Can you tell us more about Archibald Niven Leitch'? Some additional facts, a small story handed down through the family or perhaps a picture or an heirloom you can share online. Contact our curator...