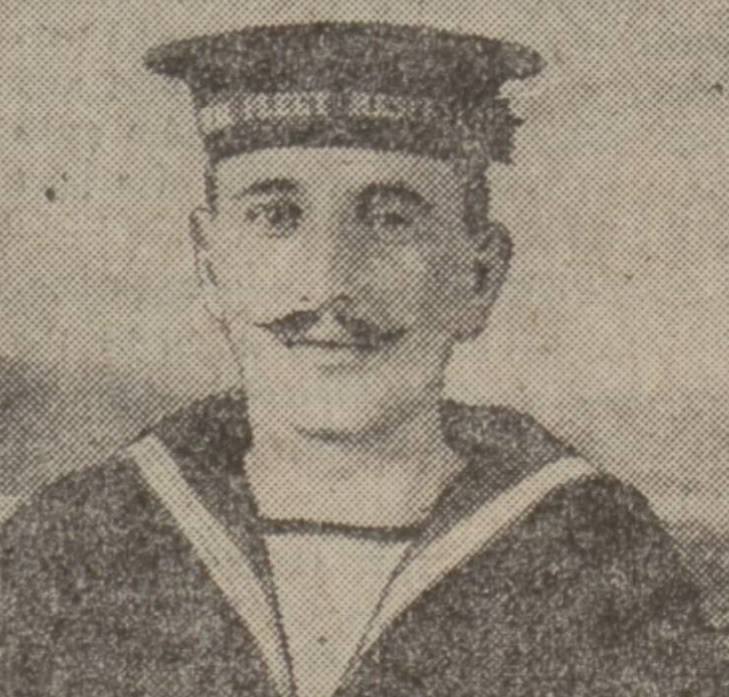 Richardson has no known grave but is remembered on the Chatham Naval Memorial. He was serving aboard H.M.S. Formidable when she was struck by 2 torpedoes fired from German Submarine U-24, 20 miles from Start Point at 2 a.m. on 01.01.1915. The first torpedo hit No 1 boiler, port side, a second explosion caused the ship to list heavily to starboard. Huge waves lashed the stricken ship, with strong winds, rain and hail, sinking in less than 2 hours.

The photo is that of Petty Officer Richardson D. Leslie, one of the Dundee men who went down in the battleship Formidable on New Year’s Day.

Leslie joined the Navy in 1896, and had considerable service in distant waters, chiefly on the Australian station.  In 1903, whilst attached to H.M.S. Mohawk, he took part in a Somaliland expedition, and had some thrilling experiences.

The British captain had been requested to investigate into the death of an Italian ship captain whom the natives had murdered.  The captain ordered Leslie to carry the British flag and accompany him ashore, along with the Italian standard-bearer.  On locating the enemy they were met by a murderous rifle fire, and at the very outset Captain Gaunt fell severely wounded in the leg, whilst the Italian standard-bearer, who was by Leslie’s side was shot dead.  Afterwards the British returned in force and soon settled the affair.

For his part in that expedition Leslie received the Somali Medal.

In 1907, being then a first-class petty officer, he was transferred to the Royal Fleet Reserve, and returning to Dundee, became a member of the City Police Force, in which he proved a most popular officer.  On the declaration of war Leslie was among the first to be called up.

While on the Formidable he was one of the quartermasters.  His untimely loss with the gallant crew of the Formidable is mourned by a large circle of friends, whose sympathy goes out to his widow and two little daughters, who reside at 3 Lorne Street, Lochee.

Can you tell us more about Richardson Dunbar Leslie'? Some additional facts, a small story handed down through the family or perhaps a picture or an heirloom you can share online. Contact our curator...