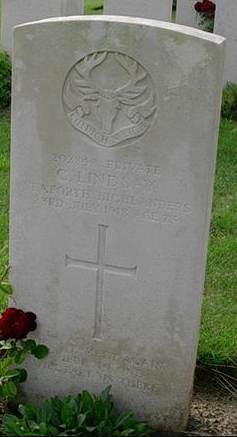 Private Charles Lindsay, Seaforth Highlanders (late A.S.C.), who was reported missing on 28th July last year, is now reported to have been killed on the 23d of that month. Private Lindsay, who was 24 years of age, enlisted in October, 1914, and had seen much active service. Before the war he was in the office of John Robertson & Son, Ltd., Seagate, Dundee. Pte. Lindsay is the third son of Mr and Mrs Lindsay, Clova Villa, City Road, Dundee.

Can you tell us more about Charles Lindsay'? Some additional facts, a small story handed down through the family or perhaps a picture or an heirloom you can share online. Contact our curator...