We need you to tell us more about the life and times of John B. Lindsay 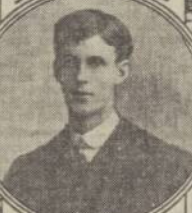 More about John B. Lindsay

Pathetic circumstances attend the death in action of Private John Lindsay, 5th Black Watch, a Dundee man, as a widow and two young children are left to mourn his loss.

The intimation of his death is contained in a letter received by his wife, who resides at 67a Lochee Road, from a chaplain.  Private Lindsay has two brothers serving with the 5th Black Watch, Private Peter Lindsay and Corporal Joseph Lindsay, and in a letter to Mrs Lindsay Joseph writes regarding his brothers death :– “Just a few lines to say that I am quite well, but John was shot while we were advancing, and died on the field.  I cannot express what I feel. For he was my pal at home and out here.”

Twenty-four years of age, Private Lindsay had served about eleven years with the Territorials.

Can you tell us more about John B. Lindsay'? Some additional facts, a small story handed down through the family or perhaps a picture or an heirloom you can share online. Contact our curator...