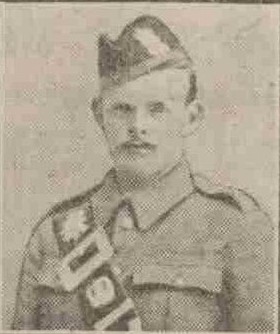 Lance-Corporal, Andrew Linn, one of three Dundee soldier brothers, has been killed at the front.  His parents reside at 62 Caldrum Street.

Lance-Corpl. Linn, met his death as the result of an accident.  He was carrying two boxes of bombs up to a trench, when one of the boxes, from some unknown cause, exploded, mortally wounding Lance-Corporal, Linn, and injuring two other men.  His company officer in a sympathetic letter to deceased’s parents, states that Lance-Corporal, Linn bore his wounds heroically.  He was a lad of great promise, and had only recently been promoted.  Nineteen years of age.  Lance-Corporal, Linn enlisted shortly after the outbreak of war, and was previously employed as a ploughman at Eastbank, Longforgan.  His two brothers are also on active service.

Can you tell us more about Andrew Linn'? Some additional facts, a small story handed down through the family or perhaps a picture or an heirloom you can share online. Contact our curator...