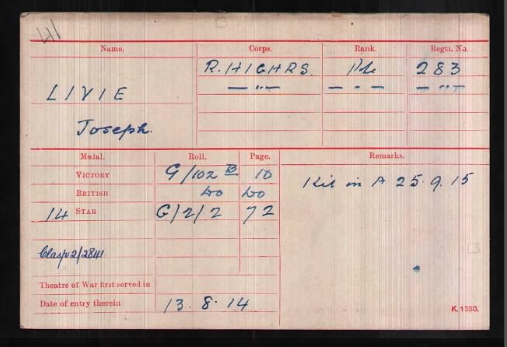 joseph has no known grave but is remembered on the Loos Memorial.

Joseph is listed on the Great War Dundee Roll of Honour but with little or no story attached ,  despite the fact he would have been one of the first soldiers of the BEF to deploy landing in France & Flanders on 13 August 1914 with the Regular Army 1st Bn Black Watch and will have fought that tenacious series of Battles from Mons,  back towards Ypres including being with the Battalion during that famous defence around Black Watch Corner in Polygon Wood where elements of the Bn withstood the assaults of the vastly superior numbers of the Kaiser’s elite,  The Prussian Guard.
There are some confusing elements to his story.   His service Number is an early one and it would seem that under Queens Regulations for the Army of 1895 the then new Regimental numbering system would put his number as being allocated between 20 March 1905 and 18 January 1906
This would fit with his recorded age at death as he would have been 18 years old in 1905.  Suggesting a year of birth of around 1887 or so.  The difficulty here is that only 1 Joseph Livie is recorded as born in Scotland between 1850 and 1910 was born in Midlothian in 1900 to Dundonian parents now living in Roslin, Lasswade.  Could this be him ?   Absolutely impossible as he would only have been 5 years old at the time this man enlisted .  There are however a number of males born with the Surname Livie in Dundee and Angus around the time of 1886, 87, 88, 89 which would fit with age at death but no Joseph.
Could he have changed his name ?
Could he have been born elsewhere other than Scotland ??
Perhaps the son of a serviceman serving overseas ??
A deeper dig into his service via medical records reveals that he was wounded in Flanders in November 1914 and in May 1915 he was admitted to a service medical unit with Shingles at which point it is revealed that he had a total of 10 years service prior to that date thus supporting a view that he likely enlisted in the Regular Army in or around 1905 when he would have been around 18 years of age which fits with the Army Numbering System in place as mentioned above,  (if the age at death of 28 is accepted)  .
We can speculate long and hard as to the reasons for this mystery regarding a name but what cannot be speculation are the hard facts,  This man did serve in 1st BW from the very beginning of the War,  his medical records are accurate, and his Sacrifice is undisputed.  Another man,  probably Dundonian,  (or certainly with declared Dundonian link),  who sacrificed his all at the Battle of Loos in 1915

1911 England Census has Joseph Livie, age 23, born Dundee, serving as a Private with the 2nd Bn. Black Watch in India.

May 1915
Pte J Livie, Royal Highlanders, 283, with 10 years service is admitted to a Stationary Hospital with shingles
He is returned to duty on 30 May 1915.

Can you tell us more about Joseph Livie'? Some additional facts, a small story handed down through the family or perhaps a picture or an heirloom you can share online. Contact our curator...