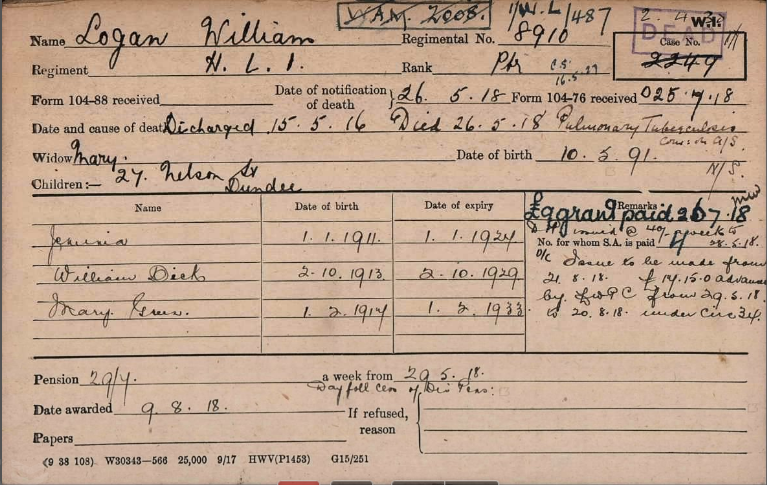 William Dick Logan was a Married man living at 27 Nelson Street in Dundee when he went to War.  He was initially recruited to the 8th (Lanark) Bn The Highland Light Infantry but actually served with the 1st in in Flanders and France.  The 8th Bn never saw service in a War Theatre,  being broken up in 1916 and used up until then to supply replacements to other HLI Bns who suffered significant casualties.  Such was the case for the 1st HLI who were a Bn in the Sirhind Bde of the Lahore Indian Division and it seems William joined them on 24 March 1915 presumably as a replacement after casualties suffered by the battalion at the Battle of Neuve Chappelle between 10th and 13th March 1915
He served with the Bn being wounded with a head wound at the 2nd Battle of Ypres where his Division including other British Indian Bns like the 1st Connaught Rangers and 1st Manchester’s alongside their Indian Battaions,  Pathans< Baluchis and Gurkhas,  distinguished themselves in heroic but forlorn attacks on Mauser Ridge.    These heroic attacks resulted in no ground won and at a cost of huge casualties,  but none the less extremely brave in the face of overwhelming enemy firepower,  particularly from Machine Gun and Artillery fire  During this battle he was wounded with a gunshot wound to the head.
William was discharged from the service in May 1916 being no longer fit for service and it is assumed this may have been due to his head wound as he became an Army Pensioner.  On discharge he was awarded the SWB,  having previously been entitled to wear a wound stripe on his uniform.
After discharge from the services it seems William was working as a Jute Mill Overseer until his death from Pulmonary Tuberculosis in May 1918.   William died leaving a Widow Mary and 3 children all residing at 27 Nelson Street

Can you tell us more about William Dick Logan'? Some additional facts, a small story handed down through the family or perhaps a picture or an heirloom you can share online. Contact our curator...